Author Of The Month!

Happy New Year everyone and welcome to 2012. To ring in 2012, I'm doing something new. Every month, for the entire month, I will feature a new author. Every week I'll put up some more stuff about that particular author. And naturally, I have to kick this off with my writing hero, N.J. Walters.

She's kindly taken the time to answer an interview and pick out a few of her favorite covers for her 50 plus books. So, without further ado, here is my interview with the extremely talented N.J. Walters:

First off thanks for being here. I love your books and having you is a thrill. :-)

1: You're very first published book is Annabelle Lee. What's it about and what inspired it?


Thank you so much, Kat. I’m thrilled to be here!


Annabelle Lee is about a shy librarian and the man who sees past her insecurities to the sensual woman beneath.


Annabelle’s not the only one with a few fantasies, Mike has been dreaming of stripping her out of her prim clothing and into his bed, and when the opportunity arises, he grabs at the chance. Soon they’re heating up the sheets, and each other, with steamy sexual interludes.


While Annabelle is luxuriating in their no-strings, secret affair, Mike is longing for something more permanent—like exploring the exhilarating heights of passion as man and wife.


I started writing Annabelle Lee because of an on-line contest I saw back in late 2003. I only had a few days until the contest closed, so I sent off the first three chapters (which is all they asked for). My story didn’t get chosen to continue on in the competition, but I couldn’t stop thinking about Annabelle and Mike. I fell in love with the characters and finished the book. When it was done, I sent it to Ellora’s Cave and was completely blown away when they accepted it. They published it in October 2004 and I haven’t stopped writing since!


2: The first book of yours I ever read was Christina's Tapestry, which I completely fell in love with. What is that book about?


I’m so glad you enjoyed Christina’s Tapestry. Reader reaction to this book and to the entire series has been tremendously positive. Christina’s Tapestry came about because I’d wanted to try writing a ménage a trois. About the same time I came across a book on Medieval tapestries in a bookstore and the two ideas just clicked.


The book is about a woman—Christina Beaumont—who impulsively buys a tapestry in a small shop. The tapestry is magic and it transports her to the world of Javara and into the arms of two massive warriors—Jarek and Marc. Women are scarce in Javara and brothers must share a woman. Only one brother can marry her, but the other is entitled to one night a week with her.


Christina experiences the lovemaking of both brothers, separately and together and they use all their considerable sexual skills to pleasure her in ways she’s never imagined. They compete sexually for her favor, helping her uncover a sensual woman inside her that she never realized existed.


3: The idea of a world where brothers have to share a woman because women are scarce is so unique. How did you come up with the idea?


I’m glad you think the idea is unique. I wanted Javara to be a Medieval-like world with castles, warriors, swords and a complete lack of modern amenities. Christina has more to think about then simply the two men who want her. She also has to consider if she can live in a world that is much more primitive than her own, to give up everything she’s ever known. It’s a scary proposition.


The book is a ménage a trois and I didn’t want to make it easy on any of the characters so I threw in the extra challenge of having only one brother be allowed to claim her as his wife, even though the other brother is allowed a night a week with her. I imagined how a medieval-like world with a lack of women might deal with the problem and the ideas simply grew from there.


4: Many of your books have a paranormal bent to them. You must love paranormal stories. What draws you to them?


I love paranormal books, both reading and writing them. I think it’s the idea that anything can happen in a paranormal. Yes, you have to lay down rules for your world, but there is so much scope to play with, whether you are writing about vampires, ghosts, werewolves, angels, demons or any other mythical creature. There is also a darkness in paranormal romances, which is fascinating to delve into.


5: You also write a lot of ménage stories in different series and single titles. What draws you to those types of tales?


The traditional relationship is between two people, but in a ménage a trois you have the challenge of dealing with three or more personalities. You have to make the relationships real and believable for the story to work. Having multiple characters opens up greater possibilities for conflict, as well as making the love scenes even steamier. There’s a lot more give and take in these stories in order to make the unique relationship work.


6: Your Tapestry series inspired a spin-off series about futuristic advanced warriors. Can you tell us a bit about your Project Alpha books?


Threads of Destiny is the fourth book in the Tapestries series and it’s the one where I really shook things up by changing some of the rules. This time I had one of the men from Javara slip through the space/time continuum (drawn there by the tapestry) and bring back a woman from the future back to Javara. But he not only brings back a woman, but two men—Tienan and Logan—who are protective of her. At the end of Threads of Destiny, the men return to their own world and I simply couldn’t leave them without telling their story. Thus, the Project Alpha trilogy was born.


Tienan and Logan are Alphas—assassins who are genetically and computer enhanced. They have escaped from the lab that created them and the Ruling Council that controlled them. Now they are outside the Gate—a high-tech shield that protects the enclosed city from the contaminated and lawless land outside. They must constantly evade security forces sent to eliminate them and their only goal is to destroy their former masters. The three books in the futuristic trilogy are: Embracing Silence, Have Mercy and Sweet Charity.


7: You have been blessed with beautiful covers. How much input do you have in their design?


The cover gods have indeed blessed me. The art departments of all three of my publishers are phenomenal. Syneca, who is an absolute genius, has done most of my Ellora’s Cave covers. I do have some input in the cover process, for which I am very grateful. I get to fill out a form that enables me to tell the artist about the characters and the book, putting in one or two things I think are key for the cover. They usually capture my vision for the book cover far better than I ever could myself.


8: Your husband is your critique partner while writing. How did that come about and what does he think of your more spicy stories?


My husband is my biggest supporter and the reason I’m a writer at all. He always encouraged me to write and, when I finally did write my first book, there wasn’t a doubt in my mind that I would show it to him. He’s the first reader for all my work. He’s great at picking out mistakes and pointing out places where I can make the story stronger.


As for the spicy stories…he loves them. And that’s all I have to say about that. :-)


9: What do you do for fun when you're not writing?


LOL Like most writers I love to read. I can’t imagine a day when I don’t read for even a few minutes. We like to go to movies as well. And, when the weather is good, I like to walk. I keep telling myself I need to pick up some of my old hobbies but, right now, the writing and reading takes most of my time.


I roll out of bed and get tea and breakfast started. While I’m waiting for hubby to get himself out of bed I check emails and some of my yahoo groups. After breakfast I write. I do all the work on my WIP (work in progress) early in the morning before my brain becomes cluttered with other things. After lunch, I’ll work on blogs, interviews, edits, emails, etc…—basically whatever else needs to be done. Being a writer is only about 50% about the writing and the rest of the time is spent on writing related activities.


There’s always housework to do, errands to run, and meals to prepare and clean up from. I’m a homebody, so if I have spare time I’ll read, go for a walk or maybe take the occasional nap. I try to treat it like a regular job and take Saturdays and Sundays off when I can. Otherwise it would be too easy to burn out. I’m not one of those writers who can write everyday. I need time off to recharge, especially because I’m in this business for the long haul.


2012 is looking like the year of the Legacy series. Right now, I have Quinn’s Quest releasing from Samhain Publishing in February. Finding Chrissten has been contracted and should be out later in the year. Plus, just before Christmas, I submitted the sixth book in the Legacy series to my editor. So I have my fingers crossed for that one.


Also, I’ll have a new Tapestries book releasing from Ellora’s Cave in 2012. Fabric of Fate is the story of the Dannon brothers, which many readers have asked for.


I’ll be working on a new paranormal quartet as well and am looking forward to digging into this new series in January. There may be a few more releases coming up in 2012, but it’s too early to say anything about those yet. As it becomes available, news will be posted on my website and blog!


Once upon a time N.J. had the idea that she would like to quit her job at the bookstore, sell everything she owned, leave her hometown, and write romance novels in a place where no one knew her. And she did. Two years later, she went back to the bookstore and her hometown and settled in for another seven years.

N.J. has also chosen some of her favorite covers that I will now display. And check back next Sunday for the next installment of what I have planned for this amazing author. 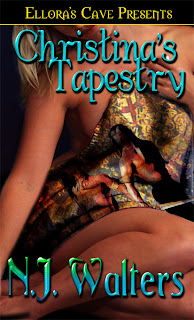 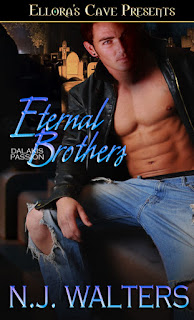 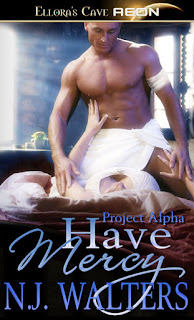 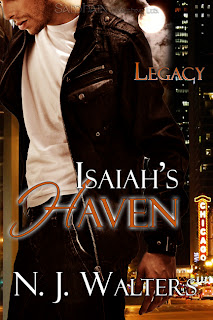 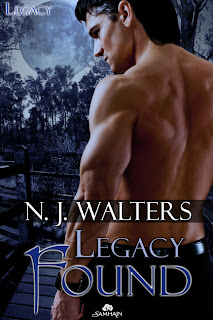 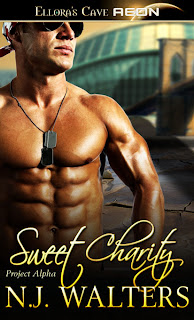 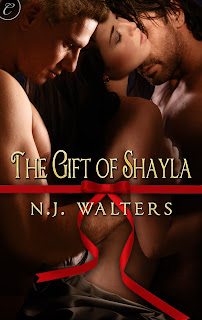