I Don't Understand It!

Ok, he was a very gifted musician. No one can take that away from him. Without a doubt, he was extremely talented. But, that does not make up for the fact that he was very perverted. Twice, he was charged with sexually molesting young boys. The first case, which probably would have put Jackson in prison, was settled out of court for millions because Michael did not want to risk a jury's verdict. The second case was marked with inconsistencies from the boy and his family so Michael was found not guilty.

But that doesn't mean he wasn't really guilty. Michael Jackson is a man who has said publicly that there is nothing wrong with sharing a bed with children. He said that it was loving and there was nothing wrong with that. Obviously, Jackson couldn't distinguish between healthy relations with children and sick relations. Michael has stated in the past that his father abused him and I do believe it. Too many of the Jackson children have acted out in crazy ways for it not to be believed. But, as is so often the case, it looks like the victim of abuse became the abuser.

I'm a victim of extreme abuse as well at the hands of my father. My father is currently in prison serving a sentence of 3 to 20 after having been caught in an internet sting trying to solicit sex with kids. His exact words that were used against him in court was that it was just good old fashioned family fun. It still turns my stomach. I have had nothing to do with my father since I was 9. I am 33 now and obviously my father hasn't changed. But just like Michael Jackson, my father doesn't believe there is anything wrong with having sex with children. I was only 5 years old the first time I was forced to do that kind of stuff with my father.

It is wrong. It is sick and it is disgusting. Having been a victim myself, it becomes easier to spot the kind of people who are abusers. Not always but it is easier. I suspected, even before the first headlines of his arrest for the first boy, that something was wrong. He surrounded himself too often with young boys. It just wasn't natural. And now people are acting like a hero has died.

All weekend long, the major networks have been running tributes to him and will continue to do so into this week. Bluewater Comics is planning to run a tribute comic book. And everyone is acting like they have been told that their best friend has died. Give me a break! Michael Jackson was a great musician. I totally give him credit for that. But he was also a very sick man who's erratic behavior has lead to trouble even before the stories of sexual molestation arose. Michael Jackson is no hero and it is time to stop treating him that way.
Posted by Unknown at 2:31 AM No comments: 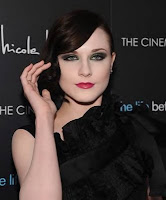 First off, I'd like to apologize because there won't be a Goddess of the Written Word this month. I have been away and it's not fair for the author to get a brief moment. It will be back next month, I promise. Moving on, as you may have discovered, I have become a True Blood fan. I LOVE that show. It's awesome. It's based on the Sookie Stackhouse novels by Charlaine Harris.

Alan Ball, the man behind the show, has made changes to the storylines. It doesn't follow the books exactly. For instance, season one is based on book one of the series. In the show, Hurricane Katrina, which ripped through Louisiana has already happened. But, when Charlaine was writing the books, book one was written several years before Katrina. She works the reality of the hurricane into her books, but not until book 6. Also, in the show Lafayette and Tara are cousins. In the books they are not. In the show, Bill is the one who stakes Long Shadow and because of that is forced to make a new vampire as punishment named Jessica. In the books, Eric is the one who staked Long Shadow and his punishment was just a fine.

Season two starts this Sunday on HBO and follows the course of book 2. Again, there are some major differences between the book and the show. At the end of Season 1, Jason joins up with the fanatical anti-vampire group the Fellowship of the Sun. In the books he never did. In book two, Jason has almost no part and in order to bring him into season two Alan Ball chose to do this. Although it wasn't a part of the book, this change does fit in with the way Charlaine wrote his character. Jason is a stupid, arrogant, narcissistic moron who believes the world revolves around him and it would be just like him to get involved with a group that was planning to murder his sister. Jason is no prize believe me.

Another difference is Jessica, the vampire Bill made in season one. There is no Jessica in the books because again, it was Eric who staked Long Shadow. She is gonna cause some serious problems between Bill and Sookie. These problems culminate in Bill yelling at Sookie very nastily causing Sookie to exit the car they are riding in and go into the woods. In the book, Bill and Sookie do have a nasty fight that has her storm off into the woods, but the fight was over something else. And, as anyone who has read the book knows, Sookie gets violently attacked by a monster in the woods. And I do mean violently. Plus, her blood is poisoned so she is dying when Bill finds her. This attack remains the same in the series as it is in the book.

Another change is the reason they go to Dallas where half the book takes place. In the book it is because Eric rents Sookie out to another group of vamps for her telepathic abilities. In the series they are going in search of Eric's missing maker. Alan Ball says the reason for this is to start showing the deeper side, and even the more fun-loving side of the powerful Viking. It is also setting up the real groundwork for the Sookie/Eric dynamic. For those of you who have read all nine books, you know that the Sookie/Eric relationship is the actual heart of story. Many who haven't read the books think Sookie belongs with Bill, but trust me, by Season 3 you will start to understand why they just won't work as a couple. The first of several very serious betrayals are revealed. Actually, in book 3, Bill not only betrays her, but he does something much worse to her at the end of the story.

Trust me when I say that, of all the supernatural men who have already fallen, and will fall later for Sookie, Eric is the ONLY one who has never betrayed her. So it's very important to start setting up their very intricate relationship. Of course there are other differences as well, but if you want to know them then read the book and watch the second season of Trueblood. The second book is titled Living Dead In Dallas.

The picture I am posting is of Evan Rachel Wood who has been cast to play Sophie Anne, the vampire queen of Louisiana. She will make her first appearance in the series towards the end of Season 2. That is another difference. We don't meet Sophie Anne in the books until the anthology Bite is released which takes place just before the release of book 6. But I have to admit, Evan Rachel Wood does fit my idea of a sleek, powerful vampire queen. What do you think? Season 2 of True Blood begins this Sunday, the 14th on HBO. Check your local listings for times. Season one of True Blood is out on DVD right now and I can say without a doubt you will love it. For those of you who haven't read the books, all I can say is don't take Bill at face value. He is up to far more than you realize and his motives are nowhere near as pure as they seem. Read the books if you wanna know what I mean.
Posted by Unknown at 12:33 PM No comments: